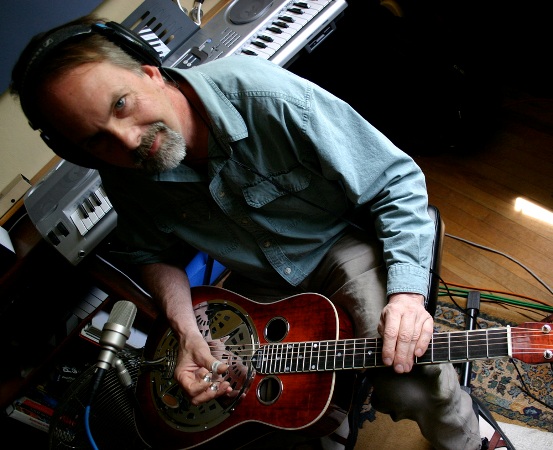 I’ve been playing with the drop E tuning for about 8 years now.
For me it started as a way to play a simple phrase for a recording but has
become my favorite tuning for a wide range of music. Before I started
playing dobro I played pedal steel in bands for 30+ yrs and I think
this may be why I’m inclined to alter the tuning if I need to. It’s
interesting how retuning just one string makes a whole new palette of
sounds possible! It all started in 2006 when I was invited to play
dobro on an album named Alaska Mando by my Alaskan friend Joe Page.
One of the songs was a bluegrassy version of the theme from the movie
Hang’em High. It opens with a call and response between the mandolin and
dobro where I needed the low E note like on an acoustic guitar. I just
tuned my low G string down to E so I could play the part. In playing around
with it I became really intrigued and wound up playing about half the
songs on the album in this tuning. Tuning the low G down to E gave me
access to full minor chords, jazzy minor 7th chords, dominant 7ths
and other cool sounds in the lower register. It was later that I
learned that Mike Auldridge had used the same tuning on his recordings
of Killing Me Softly and This Ain’t Grass in 1972 on his Blues and
Bluegrass album.

In the years since Alaska Mando I have arranged and recorded quite a
few songs using the drop E tuning: Folsom Prison Blues, Orange Blossom
Special, Wichita Lineman, Somewhere Over The Rainbow, The Christmas
Song and many more. I am often asked to explain how I think about the
tuning. Some call it G6 because of the E note being the 6th tone in a
G chord and technically that’s true, but with the E on the bottom it
doesn’t yield the sweet 6th chord sounds of Hawaiian or western swing
music. I think of it in two ways. Firstly, as G tuning with the upper
5 strings intact for most G tuning repertoire but with a low note to
use in runs and riffs where it fits; and secondly, as Em7 when using
the bottom E string as the root tone. Most of the time I’m looking at
the position markers as if I were in G tuning, but knowing I have the
root of the relative minor chord on the bottom string when I want it.

Let’s look at the notes and the chord tones they give us if you
designate the bottom string as the root. Open there’s the root E, then
B which is the 5th, D which is the 7th, G which is the minor 3rd, then
another B and D on top. Strummed altogether you will hear an Em chord
with the D notes adding the jazzier sound of Em7. If you leave out the
1st and 4th strings and play any combination of strings 2,3, and 5
with string 6 you have a complete minor triad of the root, minor 3rd
and 5th chord tones. The really cool thing about it is that it’s right
there at the same fret as the relative major chord, in this open case,
G. If you know those relative major/minor chord pairs then you will
know where to find the minor chord you are looking for. For example,
the relative minor of C is Am and both are found at the 5th fret. Now
is when some of your eyes may start to glaze over…hang in there! Or
go get out your guitar and check it out. Another easy way to locate a
minor chord in drop E tuning is to start with your major chord fret in
regular tuning, then move the bar up 3 frets and use the bottom string
as the root. For example, if you need an Am chord, start at the 2nd
fret A position, move up 3 frets and use the bottom string as the
root. Those are two ways of arriving at the same 5th fret Am.

Drop E tuning is great for music that has minor chords, two examples I play
are The Christmas Song and Greensleeves.

Maiden’s Prayer lays out great in the key of A with no capo. When you
go to the 5 chord the low E note makes it really fat. Fretting just
the 3rd string with the tip of your bar at the first fret gives you a
full E7 chord to strum before going back to A.

One last thing about having the 6th string tuned to E is that you
haven’t really lost the low G note, it’s just moved three frets up the
neck. You can play a fine G chord at the 3rd fret by barring the
bottom two strings with the rest open. That changes the E to G and the
B to D, root and fifth. Cover the bottom three strings with the rest
open and you get a nice sounding G7 chord. In this tuning it’s good to
know that regardless of whether you are in a major or minor context,
you can move up three frets and have the root, fifth and 7th tones on
the bottom 3 strings.

These are the main things I have found to help navigate the drop E
tuning. Try it out sometime and I bet you’ll love the rich sounds your
dobro can make with it.

Greg Booth lives in Anchorage, where, for many years, he’s played pedal steel guitar in country groups as well as banjo (which he first learned from Bill Emerson) and, more recently, dobro. Winner of the RockyGrass dobro competition in 2006 (after playing that instrument for only one year), regular faculty and participant in ResoSummit, and star of YouTube, Greg’s 30 some dobro videos average 1800 plays daily and are approaching 2 million views lifetime. “Greg’s innovative, expressive dobro playing is even more remarkable” says guitarist Joe Karson, “when you consider that he employs no ‘licks.’” Greg plays dobro and banjo with the Kathy Kallick Band, appears on four of Kathy’s albums and is soon to finish another KKB album this year.
http://www.kathykallick.com/index.html